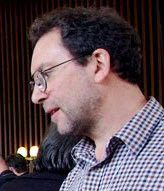 David Esslemont is an award-winning British artist, designer, printer, bookbinder, and publisher now living in America. Born in Newcastle upon Tyne, England in 1953, Esslemont studied Fine Art (painting) at the Central School of Art and Design in London (now The University of the Arts). Among his tutors were Blair Hughes-Stanton and Cecil Collins. After leaving college he established his own press in Newcastle, where he printed, bound and published a number of books with wood engravings, including several with engravings by the eighteenth-century wood engraver Thomas Bewick and his contemporaries. To see David Esslemont's artwork.

Fine printing in Wales
From 1985 to 1997 Esslemont was Controller (managing and artistic director) of the Gregynog Press in Wales. At Gregynog he designed and printed several prize-winning books including Giraldus Cambrensis for which he won the Felice Feliciano Award for Book Design in 1991. He commissioned artists to illustrate the books and many, such as Wrenching Times, with colour wood engravings by Gaylord Schanilec have become highly sought-after collector's items. At Gregynog he was responsible not only for the design and printing but also the strategic development, marketing and general management.

Design
As a designer Esslemont has worked on a variety projects from a book stamp for the Bodleian library to a whole new visual identity for the University of Wales Swansea, including design guidelines and the application to signage and marketing. Many smaller commissions such as bookplates have been undertaken for private individuals and the design of stationery and logos for associations and small businesses. Digital typesetting and design projects include books for the British Library, Previous Parrot Press, and the first two issues of Parenthesis for the Fine Press Book Association.

Printing
Besides printing his own publications Esslemont also undertakes commissions. For example: All in Good Time, the autobiography of handmade watchmaker George Daniels, for the Peoples Archive, and The Prelude for the Wordsworth Trust.

Bookbinding
From the outset Esslemont has also bound his books himself and most were issued in leather bindings: full leather, quarter leather and designed fine bindings, often with gold tooling. Today, David Esslemont is pleased to offer his services as a bookbinder for small editions of fine print books. For example All in Good Time and Angels for the Celtic Cross Press. He also welcomes commissions for one off bindings such as the binding on Wood Engravings by Agnes Miller Parker. Occasionally he finds a book that inspires and will create a binding specially for that volume.

The Wordsworth Trust
Esslemont was invited in January 2005, by the late Robert Woof, inspirational Director of the Wordsworth Trust, to be an Artist in Residence with the Trust in Grasmere in the English Lake District. This provided a unique opportunity to pursue watercolour painting and work on illustrations for a projected new edition of Wordsworth's poem, The Prelude.

Minneapolis
In Minneapolis during the summer of 2004 Esslemont printed The Folly and Wickedness of War at the Minnesota Center for Book Arts where he enjoyed the privilege of being an artist in residence.

Esslemont has lectured widely in the U.K. and U.S.A., and his work can be found in both private and public collections worldwide. His archive is held at the University of Iowa. He has been artist-in-residence with the Wordsworth Trust in Grasmere, England, and Minnesota Center for Book Arts (MCBA) in Minneapolis. His recent work includes illustrated editions of John Keats' poem To Autumn, Wordsworth's The Prelude, and Barack Obama's inaugural address.

Esslemont is member of the Double Crown Club and the Wynkyn de Worde Society.
at December 12, 2009

Email ThisBlogThis!Share to TwitterShare to FacebookShare to Pinterest
Labels: About