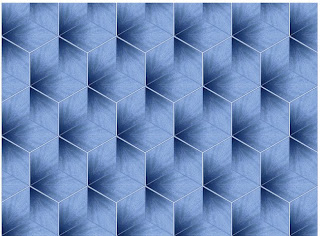 Experimenting with a square detail from the blackberry leaf I discovered the Café Wall optical illusion, and created a snow crystal. This reminded me of a tiled floor I first saw in a church in Italy and prompted me to re-create the pattern using the leaf on a parallelogram. The pattern is a tessellation of parallelograms. The parallelogram is constructed from two equilateral triangles and is also known as an equilateral quadrilateral or rhombus. Three rhombi form a hexagon. So the floor pattern is also a tessellation of hexagons. 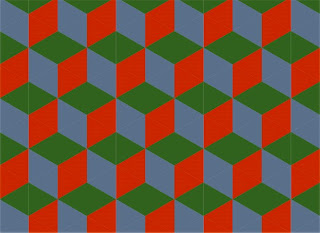 Giving each rhombus a distinct colour emphasises the illusion of three-dimensional cubes. Patterns such as this, based on symmetry, belong to the Wallpaper Group (or Plane Symmetry Group or plane crystallographic group). Apparently, there are 17 distinct groups; and this pattern would appear to belong to Group p6m.

The hexagon is a six-sided polygon with six vertices. It can be constructed with a compass and a straight edge following Euclid’s method in his Elements, Book IV, proposition 15. The most colourful edition is Oliver Byrne's The first six books of the elements of Euclid : in which coloured diagrams and symbols are used instead of letters for the greater ease of learners. Printed by Charles Whittingham at the Chiswick Press for William Pickering, 1847. (I first saw a copy of this book in the library of the Book Club of California.) 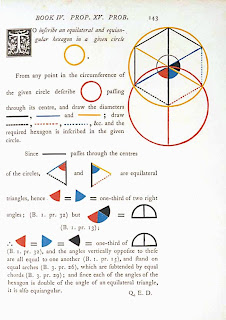 The basic snowflake ice crystal is a hexagon. Other examples of hexagonal forms in nature are the honeycomb and the basalt columns of the Giant’s Causeway in Ireland.
at January 05, 2010