Repair the binding, lose the map?

I am in a quandary. I have a treasured copy of Publii Terentii Afri Comoediae (The plays of Terence) printed and published by John Baskerville in 1772. The book is a fine example of Baskerville’s later design and printing (he died in 1775), the text is laid out generously, printed of course in his own Baskerville types on the characteristic laid paper, smoothed or pressed after printing.

The binding is a contemporary full brown calf with faint traces of a diced or cross-hatched pattern, with gold rules to the front, back, edges and insides of the boards and spine, and blind tooling on front, back and spine. An attractive decorative tool is used between raised bands on the spine.

The leather spine is attached by only one hinge, revealing the paper linings: fragments of a coloured map of the Caribbean. Recently identified as “A New and Correct Map of American Islands, now called the West Indies . . .” by Thomas Kitchin, it was published in the September issue of The London Magazine, 1762. Many different-coloured versions exist, as is common. 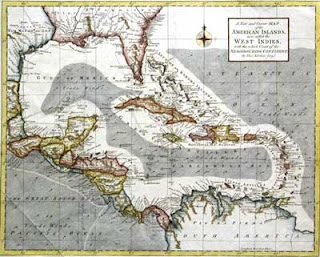 Unfortunately the broken hinge also separates the map, but with a little careful surgery in Photoshop the fragment can be re-assembled. Although the map is distorted because of the curvature of the spin, and the colouring is different, it can be compared with the detail from the map shown below (on the right).

The fragment is not a mediaeval manuscript, it has no monetary value (the complete maps sell for between $200 - $500, yet it is interesting because it sheds light on late eighteenth century binding practices. As the map was published in London, we might assume the binding came from a London binder. The book is inscribed: "With B. Drury's best wishes, Eton, July 26, 1818." and in a different contemporary hand: "Tullamoow"??. Benjamin Drury was a colourful if eccentric Eton master (A history of Eton College, 1440-1910 by H. C. Maxwell Lyte). The use of a coloured map is surprising as they were not coloured when published in The London Magazine. Was it a reject? Whatever, the horizontal and vertical ruling on the map would have helped in cutting and aligning the paper lining when forming the hollow for the binding.

The question is: what should I do, repair the binding and lose the map or leave it alone?