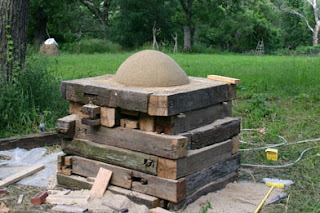 Strictly speaking this blog is about my work as an artist . . . but occasionally the sculpture has other uses, in this case a wood-fired clay pizza oven. The sand dome (above) is standing on a hearth of fire bricks that came from the demolished East Side school in Decorah. An organization was formed to recycle the re-usable building material, Oneota Historic Future Alliance – East Side Material, and I was fortunate to find enough bricks for the hearth among the piles of salvaged rubble. The plinth is made from some of the old oak beams saved from our barn renovation. 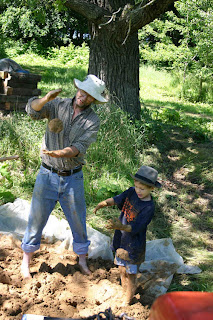 We dug some clay and mixed this with sand and water with our feet – a wonderful pedicure – here we are testing the clay to ensure it is the right consistency. 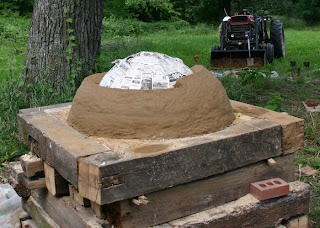 We used the clay to make adobe bricks which were laid over the newspaper-covered sand dome. 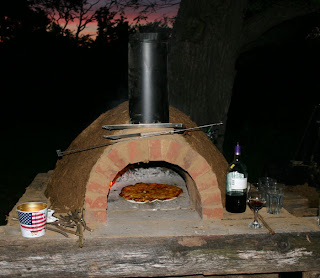 A couple of days later . . . an entrance has been cut out, an archway built and a chimney added together with a layer of mud and straw insulation. We made the first pizza before the final layer of adobe bricks were added! 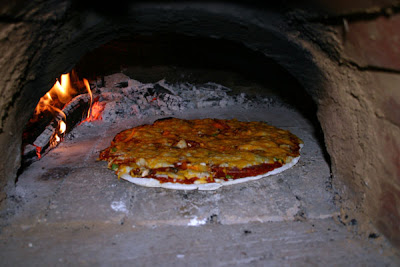 Within a week I had made more than twenty pizzas! We are now learning how to use it, and not just for pizzas, but also for baking bread, sauteing and roasting. Carleton College in Northfield, Minnesota was able to restore their abandoned school – the East Side school in Decorah was not so lucky. However, thanks to the Oneota Historic Future Alliance at least the school's very fabric, it's bricks, are seeing a new life.  As I stand over the hearth, with the ferocious heat burning my face, enthralled by the fluidity of the flames, savouring the tantalizing aromas, tasting the magic of the wood-fired oven, it is gratifying to think we are a part of that future.
at September 23, 2011