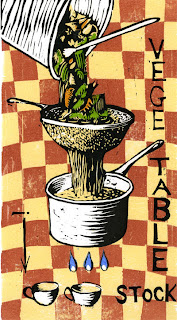 This is a hot story. Audacious as it may sound David Esslemont, won a chili contest in 2012, scoring 10/10 from all three judges; but the audacity doesn’t stop there – next week he’ll be cooking his chili in California! How come? Read on.

Esslemont makes books, not your ordinary books, but fine, hand-printed hand-bound collectors items, many of them prize winners themselves, that are to be found in public and private collections worldwide. He has a passion not only for books but also for food and cooking, a passion, he finds, he shares with many others.

Now he’s turned the prize-winning recipe into an illustrated book with a 4-figure price tag. The from-scratch recipe (there is no chili powder here) includes for example, instructions for making ancho paste and vegetable stock, and serving it with a topping of sour cream mixed with lime juice, cilantro, Maldon salt, fresh habanero, Fresno and jalapeno chilies sautéed with garlic; and a garnish of vinegar-soaked scallions and a sprinkle of julienned red, orange and green chili peppers. The recipe is presented in a series of thirty-nine multi-color woodcuts. There is no text, apart from the occasional word carved on the wood blocks. The ingredients and directions are presented as pictograms.

The book is available in two bindings: twenty regular copies are stab-sewn in chili-red-cloth-covered boards; ten deluxe copies in an elegant, white alum-tawed pigskin binding, blind-tooled to look like a white linen tablecloth in the middle of which sits a bowl of chili sparking with gold. Find out more about the book on the artist’s website: solmentes.com.

Chili: a recipe was published this February at the Codex book fair in Berkeley and Esslemont will back in town next week to present a talk on Tuesday, September 10, titled “Making Books – and Chili” to the Colophon Club (members and guests only), one of the Bay Area’s three book clubs, described by the president, Susan Filter, as "a little more bohemian than the Roxburghe [Club]."

After a flying visit to Los Angeles to show his work to librarians at The Huntington and Clark libraries, Esslemont returns to give a workshop he is calling “Making Books and Chili – The Nitty-gritty of Publishing” ("What are you going to do with the books you make? Are you going to give them away, or perhaps sell them? Whatever you decide to do it’s called publishing, and there’s a whole lot more to publishing than you would think.") on Sunday, September 15, at the San Francisco Center for the Book. This will be followed in the evening by a “chili dinner” for which the artist will cook his legendary chili.

It’s not the first time Esslemont has cooked outside Iowa. In May this year he was invited to cook his chili for a private party in New York City! For a unique opportunity to see the book and taste the chili, come along on Sunday evening, September 15, from 6 to 7.30 pm, to SFCB, 375 Rhode Island Street, San Francisco. Contact: Malgosia Kostecka or Kathleen Burch, telephone (415) 565 0545.

David Esslemont studied fine art at the Central School of Art in London and was Artistic Director of the University of Wales Gregynog Press from 1985 to 1997. He has won several book design awards including the Felice Feliciano International Award for Book Design in 1991. Esslemont has lectured widely in the U.K. and U.S.A., and his work can be found in both private and public collections worldwide. His archive to 2005 is held at the University of Iowa. He now lives with his family on a farm in northeast Iowa and continues his work as an artist, designer, printer, bookbinder, publisher and farmer. ###
at September 05, 2013