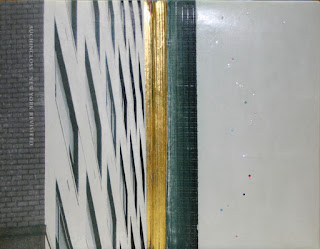 My binding of New York Revisited by Kenneth Auchincloss is part of this touring exhibition organized by Designer Bookbinders UK. "InsideOUT celebrates the art and craft of contemporary bookbinding and private press printing. This ambitious project is a collaboration between thirty-four binders based in the United Kingdom and twenty-five based in North America." 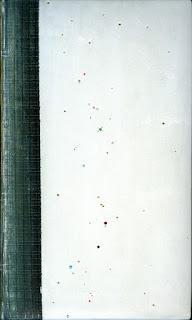 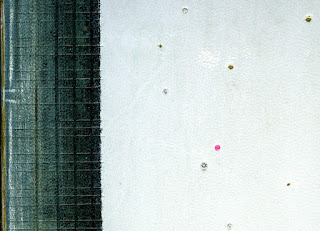 The binding uses white alum-tawed goatskin, inkjet, acrylic ink, blind and gold tooling, and is inset with diamonds and other gemstones.﻿ The main image on the cover is a detail of a view looking down Fifth Avenue – the view extends inside the front and back covers where it faces views of Lexington Avenue. 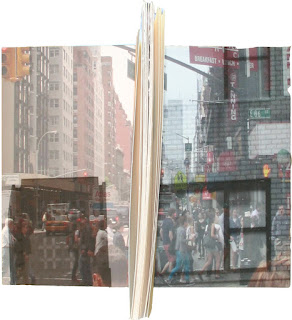 In these images we see a contrast between the rich and poor, exemplified by the stocking feet jutting out from a shop doorway, and the bustle of pedestrians. These are paste-grained and form the leather-jointed endpapers. 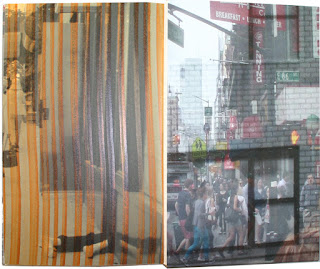 The polished leather on the front cover, embedded with real gemstones, again highlights this contrast. 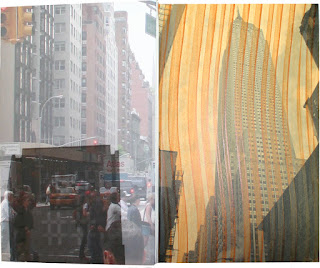 The book is presented in a drop back box together with an extra set of Schanilec's engravings and prints from the original blocks engraved by Rudolph Ruzicka for the book New York, published by the Grolier Club in 1915.

This binding is now in a private collection.

Indian curries were voted Britain’s favourite dish for many years. No surprise then that curry is the subject of this new book from Solmentes Press.

There are many different ways to cook curry – this transcript of a conversation with a taxi driver describes just one approach and was recorded at 4.30 a.m. while traveling between terminals at London’s Heathrow airport.

The illustrations are woodcuts based on kolam, Indian designs that are created outside homes to bring prosperity and ward off evil spirits.

"Roaming London in the early 1970s, English art student David Esslemont tastes his first Indian curry – he likes it.
Today a professional artist, book designer and printer, Esslemont lives in rural Iowa, a Midwestern American state so vast that England would fit comfortably within it’s borders. Unfortunately Iowa has just twenty-four Indian restaurants – a mere shadow of England’s thousands. Where, Esslemont wondered, can I go to get a decent curry?

Always a lover of good food, Esslemont began experimenting with his own recipes. His love of cooking became a passion – in 2013 he turned the recipe for his prize-winning chili recipe into an award-winning limited edition book.

Now Esslemont focuses his attention on curry as he explores the culture and cuisine of South Asia, experimenting with herbs and spices to transform not only his evening meal, but also lunch and breakfast. In his quest to understand the gastronomy of South Asia he scours cookbooks and food media and . . . talks to taxi drivers.

There are many different ways to cook curry – this transcript of a conversation with a taxi driver describes just one approach and was recorded at 4.30 a.m. while travelling between terminals at London’s Heathrow airport.


The woodcuts are based on Indian Kolam, designs traditionally created outside homes to bring prosperity and ward off evil spirits. Order now to take advantage of a special pre-publication subscription price at solmentes.com.


Fifty copies hand printed from the original wood- blocks, the text from polymer plates, bound as follows: forty-five copies in cloth-covered boards, presented in a drop-back box – $460 ($360 pre publication) and five copies in a deluxe binding. 175 x 254 mm ( 7 x 10 ins) landscape, 24pp, 10 woodcuts. To be published in May 2015 by Solmentes Press." (Edited by Robert Wolf)

The Fine Press Book Association in collaboration with the Manhattan Vintage Book & Ephemera Show on Saturday, April 11, 2015, from 8 am to 4 pm at St. Vincent Ferrer parochial school on the corner of Lexington Avenue and 65th Street. Featuring thirty presses from across the US, UK, Canada and Russia.

This is an addition to the Vintage Book Fair, known colloquially as the "Shadow Fair." It is a less-formal, less-expensive fair held during the same weekend as the New York Antiquarian Book Fair at the Park Avenue Armory. This year, for the first time, it will be located right around the corner from the main fair at the Park Avenue Armory.
at April 09, 2015 2 comments: