Englishman makes pizza from scratch and sells recipe for $$$$

It all began with a dream of establishing a self-sufficient “Pizza Farm” business. 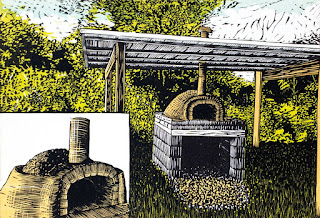 Decorah, IA – Artist David Esslemont dreamt of establishing a “Pizza Farm”. He grew wheat and tomatoes and built a clay oven – but it just wasn’t feasible. However, he had another idea: a limited edition hand-printed book.

Pizza from Scratch, a visual narrative in woodcuts and linocuts, tells the story of how he literally grew a pizza on his farm in Iowa. With orders from distinguished institutions such as the Library of Congress and the British Library the book promises to be quite a success, and with copies selling for up to $4,800, it will help pay the heating bills this winter. 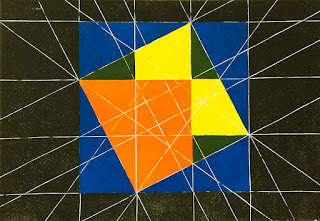 Weeds, fire, cultivating, seeds, seedlings, broadcasting, harrowing, harvesting, threshing and construction details are all depicted together with a diagram proving Pythagoras's theorem (used to make a right angle when laying out the foundation for the walls).

Esslemont grows the oven from scratch. Cement block walls support a reinforced concrete plinth and a layer of firebricks. He then makes adobe bricks with clay dug from his farm, and forms the oven around a mound of sand. After adding a layer of insulation, more clay bricks, a chimney, and a roof, it's ready to fire up. 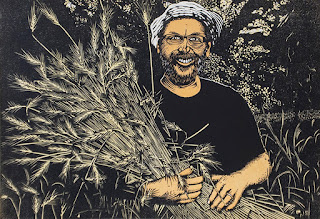 As the oven takes shape, the artist appears in a number of self-portraits that reveal his growing obsession with the project. The book concludes with instructions for making the dough, cheese, and tomato sauce and cooking the pizza. 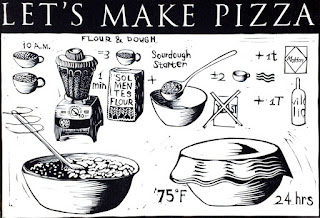 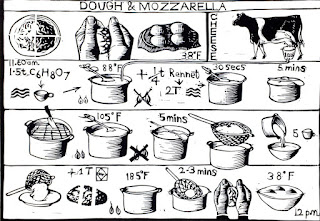 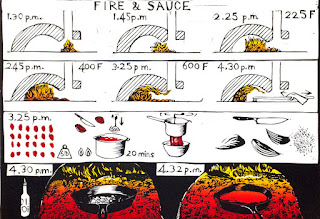 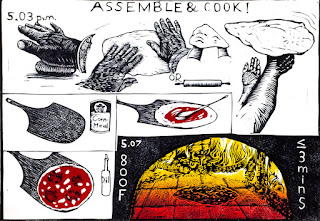 Finally, there is an extraordinary multi-color print of a pepperoni pizza. 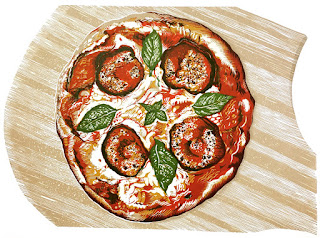 Pizza from Scratch is published by Solmentes Press in a limited edition of 40 copies, 10.5 x 15 inches, landscape, 68pp. Thirty-six images together with a separate plan, printed from the original blocks. Five deluxe copies bound in white alum-tawed goatskin – $4,800, and thirty-five copies in cloth-covered boards – $2,400.

Full details and images on solmentes.com
Read the story behind the book here

Bio
David Esslemont is an artist, designer, printmaker and bookbinder who makes books from scratch, most recently about food, and published under his Solmentes Press imprint. He was Artistic Director of the University of Wales Gregynog Press from 1985–97 and has won many book design awards including the Felice Feliciano International Award in 1991. Esslemont’s work can be found in both private and public collections worldwide. (His archive to 2005 is held at the University of Iowa.)