- February 11, 2019
Solmentes Press is delighted to announce the winner of the prize draw at the Codex Book Fair in Richmond, California was fellow artist, printer and bookbinder, Dimitry Sayenko from Saint Petersburg, Russia. Поздравления Dimitry!


Dimitry won a signed copy of the limited edition linocut "Pepperoni Pizza" by David Esslemont from his book, Pizza from Scratch. 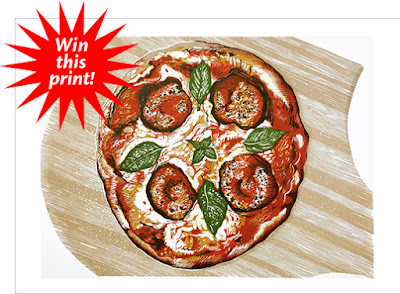 Prize Draw
To win a copy of the print, visitors to the Solmentes Press table at the Codex Book Fair (February 3–6) put their business card or name and email address in a bag from which a winner was drawn at the end of the fair. Read more about Pizza from Scratch and buy copies of the print ($300), visit solmentes.com.

Thanks to everyone who entered to win the print and for their interest in Solmentes Press.

Popular posts from this blog

'In the beginning', and, 'Genesis'. In On heroes, hero-worship and the heroic in history Thomas Carlyle makes several references to the 'divine . . .' and 'sacred Hebrew Book'. In Sartor Resartus he refers to 'young Ishmael' in the 'destitution of the wild desert'. Throughout both books he includes many biblical references and allusions. For my illustrations, I looked for a quotation, and then searched for an original source – and I found Hebrew texts. The history, meaning and beauty of the letterforms are fascinating and I began to draw and learn a little of the Alephbet. The first problem I encountered was the inability of Microsoft Word and Adobe InDesign to render the text as right to left (RTL) reading. Curiously my Firefox browser, Apple Mail and TextEdit did work, which helped when using the Hebrew keyboard layout. Secondly, my insatiable thirst for language was hampered by a new alphabet and the myriad forms i
Read more

January 12, 2015: Making adobe clay involves 'puddling' – the mixing of clay, sand and water with your feet, hence this pencil study. Drawing is an important discipline for the artist – daily practice is worthwhile. This post includes detailed studies as well as sketches for the illustrations to the Pizza book. One of the main goals is to grow wheat for flour to make dough for the pizza. Here is a pencil drawing of an ear of Glenn organic Spring wheat grown on our farm here in Iowa. The first step in preparing the field for planting was to burn last years weeds, with the hope that many of the weed seeds were also incinerated. At this point I began to think the book should be landscape format and this subject will become a double page spread lino cut.   Mixing cement and building concrete-block walls is hard, thirsty work, especially in the heat of the summer and the builder deserves a well-earned beer at the end of the day, especially when an impo
Read more

Stockhausen In Freundschaft – work in progress

In Freundschaft – gallery installation – 1 Working again on the Stockhausen piece for solo clarinet, In Freundschaft. The installation photo above shows two large paintings together with smaller sketches. The painting on the right wall measures 96 x 42 inches, while the painting on the back wall measures 72 x 48 inches. These are derived from the "master painting" (67 x 108 inches) seen below. In Freundschaft – gallery installation –2 None are intended to be the definitive, or final work in this series, as it still a work in progress. These pieces started life as interpretations or responses to a piece of music, but there comes a point in the creative process where the painting grows and matures and develops a life of its own and leaves the home, so to speak. The main challenge is how to represent the linearity of music on a single rectangle and the solution might be a series of paintings. I have made a series of linear drawings in book form, where the pen be
Read more